Born in Uelzen in March 1990, Kathleen grew up in Bad Bevensen, Germany,  on the small “Stud at the Ilmenau”, where she developed a great passion for riding.

As of the age of 13, Kathleen has been quite the accomplished rider, winning the Hanseatic League for the first time in 2003. This was followed by another five titles. Years later, she qualified to participate in the German championships. Kathleen became German champion in 2005, after she became fourth in 2003 and won the silver medal in 2004. In 2008 she won another bronze medal.

At the age of 14 – and therefore as the youngest rider – Kathleen was awarded the golden riding badge. In 2014, she was also able to celebrate her 160th S victory, including Grand Prix victories, which she achieved with different horses. At the time of the 2004 European Championships, she was teamed with her Oldenburger stallion Florestan and came in seventh place. With her younger horse, the Hanoverian Wonder, she won the silver medal in the team championship in the European Championship in 2008 and again a 7th place in the individual evaluation. 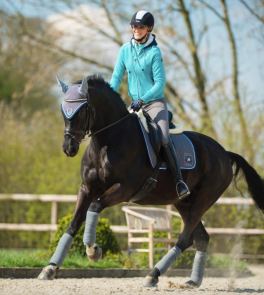 Throughout her riding career she has also had a lot of  pleasure riding in the other disciplines like jumping, and has been quite successful doing so. She has ridden the international amateur jumping tour and was able to reach a considerable 4th place in the derby of Hamburg.

At the age of 21, Kathleen rode to victory in the German dressage derby. 8 years before, her father had won the blue ribbon at the same event. Kathleen also won the U25 final in 2011 as well as the big derby. She has won the U25 finals three times with different horses.

Not only is Kathleen an accomplished rider, she has also studied economics psychology in Hamburg. She graduated with a Bachelor of Arts in 2014. “I just wanted to do something else. Economic psychology is really exciting and Hamburg is an incredibly beautiful city. The Derby win has linked me emotionally even more to the city, “says Kathleen. Performance and university studies was possible for her because she was supported by her family greatly.

Since the successful completion of her studies in 2014, Kathleen has devoted herself to 100% horsemanship with the aim of taking over the equestrian business of her parents at some point. Today she works on the daily training of the horses and additionally is growing her experience as a trainer in Germany and abroad. Kathleen has also already made a name for herself as an instructor for young horses.

If the sporting success continues as before, Kathleen will come a little closer to her dreams and goals. “Being able to gain a foothold in the professional sport would be a significant milestone for me. I am looking forward to the coming season and great tournaments. ”

Kathleen, Kathi as known to friends, loves a casual classy look. Having a few great sponsors who provide her with a daily choice of riding wear, influences her style a lot (in a good way!). She loves the collections that Euro Star, No Concept and Roeckl have to offer.
A big part of her life are her dogs Lilly and Schoko, who  had to have a special feature in this look too, as they are with her every moment of the day.

Like her look? Here is all you need to know:

Riding daily in Northern Germany in winter time can be a frosty business, so it was key to add in a warm winter Parka like this Olive green Fidelity riding jacket by Euro Star. We added on an extra layer for during the ride with the ANKY Tehnical Casuals Thermo pro waist coat and combined it with a No Concept black turtle neck sweater. All of this combined seamlessly with a pair of Euro Star Energy full grip dressage breeches.

The accessories enhance the color scheme of Kathleen’s look: a pair of custom Kempkens boots, with a matching H&M belt and a pair of black Roeckl Wago winter gloves (read the review here) combined with a stylish and safe Uvex Suxxeed Glamour helmet. And of course a pair of stylish shades by Linda Farrow to finish off the look.

Lilly and Schoko could not be left behind and have matching styles with their Weatherbeeta 1200D parka’s and MagicTack customisable dog collars.

Find out more about Kathleen here

One thought on “Special Edition: the stylish equestrian for Kathleen Keller”