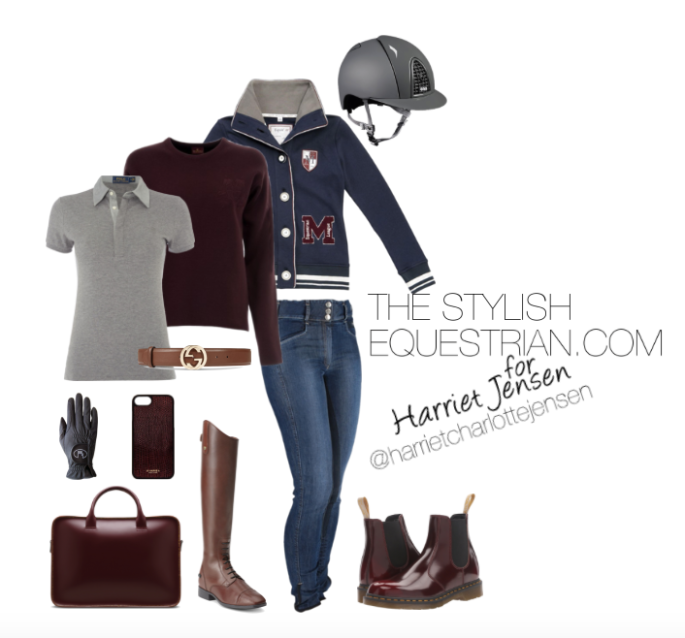 The young and ambitious half Norwegian, half German Harriet Jensen, who is currently residing in Hamburg, Germany, has been passionate about everything horse ever since she was a little girl.

She started riding when she was about six years old, but at that time only went to summer camps, rode for six months a year, returned back to school and didn’t ride horses until the next year.
At the age of 10, Harriet’s parents bought her a pony, Mister Nice Guy, who is still with her family. Mister Nice Guy was that one special pony that taught both her and her sister how to ride. She wasn’t really into horse shows at that time. Although she was quite ambitious when she was younger, the dreaded puberty made it fade away a bit and she only rode “for fun”.
However, in 2011, when Harriet finished school, she got her first ‘big’ horse: a mare called Wonne. Wonne was a true athlete with a lot of go and great potential for the higher classes. Inspired by Wonne’s energy, Harriet got really ambitious and wanted to start her “career” as an amateur in the show ring in 2013. She had recently come back from the Netherlands, where she’d been staying throughout 2012 with Wonne and Caesarion, whom a friend of hers bought in 2012. 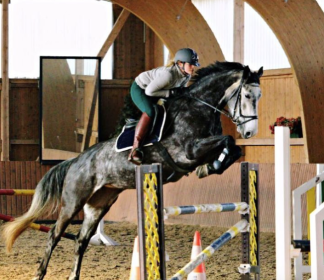 When back in Germany in 2013, Harriet started participating in horse shows, and could really see fast progress with Wonne and she got a lot of ribbons … until Wonne injured herself.
At the end of 2014, she decided that the best thing to do was that Wonne should have a foal and enjoy and early retirement from the horse sport, hoping that if she recovers fully, she might be able to make a come-back in the sport.
In 2016 Cosma was born, her first self bred Hannovarian mare. Later in 2016, Harriet also bought Carlotta, a 2016 born “Deutsches Sportpferd” mare.
Because Caesarion and Harriet  had a lot of bad luck and he also got injured every once in a while because of his inperfect hooves she decided it was time for her to look out for a new sport horse, that would help her fulfil her dreams. So in the end of 2016 she bought Civa, a “Deutsches Pferd” mare who had already proven that she is capable of performing well in higher level competitions under a different rider.
Harriet is currently  successful in the 1.20 m class, but definitely wants to reach out for more, her dreams and goals are set high and she hopes to fulfil them some day.

Her biggest inspiration is Edwina Alexander Tops, she finds her sympathetic, loves her style and is always motivated by watching her ride.
A fun fact about Harriet: whenever she doesn’t feel confident about her riding she watches an interview on YouTube featuring Edwina Alexander Tops and this somehow motivates her to stop feeling miserable and head out again full of energy to go and achieve her goals.
Harriet really likes the true equestrian style: it’s sporty, elegant and you’re able to make “less look like a million” with a few details and accessories. Her favorite equestrian brands are KEP, Pikeur and she loves the style of the products of Miasuki. Her favorite colors are bordeaux, dark green, marine blue – the classic colors. She loves to add a little twist to it all: “I don’t think that you need to stay in the equestrian brand sector to create a great equestrian outfit” she told us. “Fashion, especially the equestrian fashion, is fun and you can get really creative with it, that’s what I love about it so much. I love to wear something that’s really working for me while riding, something functional, that doesn’t necessarily has to look like the typical functional wear.“
Like Harriet’s style? Here’s all you need to know about her look:
As Harriet loves Pikeur, we started with a pair of Pikeur Candela jeans breeches and went with a few of her favourite classic colors with grey Ralph Lauren polo, a Miasuki bordeaux Nahar sweater and a sporty, yet stylish Equi-Theme college style vest.
We accessorised the look with her favourite grey KEP Italia helmet and Roeckl gloves and worked with a classy brown Gucci belt that matches her Ariat Challenge Contour field boots.
As Harriet is always creating wonderful shots, video’s and blog posts for us to follow, she needs to keep her phone and laptop with her at all times. So we’ve added on a Vianel phone case and the funky and fabulous Dr. Martens leather laptop case for her to keep her valuable  items safe.
Last but not least, she always love a pair of shoes to change into after her ride and what better than a pair of bordeaux Dr. Martens Chelsea boots to match with the overall them of her #rootd.
Follow Harriet on Instagram, youtube and on her blog to keep up with her daily life and find out more about her horses and her style.
Have a stylish ride!

2 thoughts on “Special Edition: The stylish equestrian for Harriet Jensen”