Emma has always been utterly obsessed with horses. She used to ride around everywhere on her mums broom and pretend she was on a horse.
She remembers feeding the neighbors horse bread at her grandparents house and also still remembers the smell of those horses and how wonderful it was.
She was really lucky that her parents decided to buy her her very own pony when she was 5. Like many ambitious young riders, she didn’t actually come from a horsey family so this was a big deal looking back on it.
Kalo – her 12hh liver chestnut pony was the love of her life; they did everything together! Emma and her family lived on 5 acres in the country in Australia and she would ride over to her friends house and they would go riding around on her 100 acre property and go swimming in the dam and have picnics out there.
Emma did a couple of days of pony club on Kalo but he didn’t want to jump at all so she ended up doing some show classes on him but mainly just had a lot of fun riding around bareback everywhere – it was the best!

When Emma was young, she would always watch her mums dressage video called ‘the horse in sport’ and was just fascinated by the sport of dressage. It was the most beautiful thing she had ever seen and she watched that video pretty much every single day.

After watching the dressage at the 2000 Sydney Olympics she became totally obsessed with riding at a professional level like the riders she had watched. That memory still drives her to this day.

She got her first real dressage horse at 17. A 17.2hh 4yr old Warmblood which she kept in the city. Looking back she’s not sure how she survived that but he was a great horse and they trained all the way up to the Grand Prix together. She started accumulating horses to train from then on and was also fascinated by horse breeding and had a small breeding program with 5 broodmares back home.
Emma and a friend organized a clinic with their dressage idol Steffen Peters and after riding with him she knew that she had to learn how to ride like that.
She made the move to San Diego, California to train with ‘The Peters’ in 2009 and has been there ever since (…and Steffen is still her riding idol). Emma currently  trains with Shannon Peters. 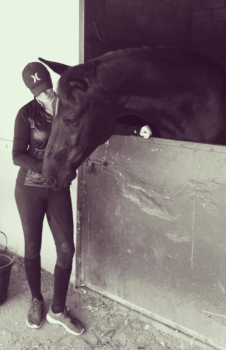 She purchased a 6 yr old inexperienced broodmare (Velvet) and a 4yr old stallion (Zidane) in 2008. Her broodmare is now CDI*** Grand Prix Special winner and Zidane is a successful CDI small tour horse.
She has received her USDF Silver and Gold medals in the USA and has been placed on the State High Performance squad in Australia multiple times. She’s an ambitious rider, one to watch out for on the highest levels of international competition in the years to come.

Emma likes wearing navy with a twist. Some of her favourite brands hit the nail not he head with this style, for example Animo, Equiline and Kingsland. She is also obsessed with grip breeches (great for sticking to the saddle in dressage!), this is why we added in the Kingsland Kessi navy full seat breeches. As a base layer we decided on the Animo Coreana shirt and layered on a preppy but funky Gucci tiger applique sweater. California weather can be chilly in the mornings so we added on a few layers to choose from when riding: a red lightweight Prana Lyra vest and a Schott NYC silver grey bomber jacket

Emma LOVES KEP Italia helmets and is currently eyeballing the navy chromo textile with the glitter front, which we had to ad into the look. Additionally, we needed to include Emma’s signature Hurley baseball cap (best solution for helmet hair) and  pair of her signature Victoria Beckham aviator shades.

Petrie boots are Emma’s absolute favorite. She has a pair of black patent ones as well as the tan Athene with a front zip and buckles we included in the look. We matched a pair of Roeckl gloves and a Fossil Emi stud belt to the boots and added on a casual navy MANGO scarf to finish off the look.

Learn more about Emma and her equestrian business here.