Meet Megan Goldfarb, a stylish rider with an inspirational story:  going from an American Eventer to a Spanish Dressage Rider

“Make your dreams a reality” is the slogan Megan tries to live by. Last month she made her dream come true, by packing herself up from the San Francisco Bay Area, and moved to Malaga Spain, to ride and train with the best Spanish horses and trainers in the county.
Megan started her equestrian training in Eventing at 12 years old. One of her Pony School trainers was an Eventer and quickly immersed her in the sport which she took to immediately. Soon thereafter, she was taken on by a well known French Eventing trainer and her journey into the world of Eventing began. 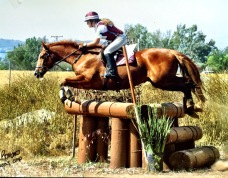 She competed successfully at the upper levels in the U.S, on her Selle Francais, Hipius, who she purchased and imported from France. Five years ago, Hipius was sadly diagnosed with Navicular, a degeneration of the navicular bone in horses hooves, causing her to have to retire him. She stopped Eventing not only because she did not have a horse to compete on, but she also had some serious falls and broken bones, which made her rethink if she still wanted to stay in the sport. Megan continued to take jumping lessons here and there, and traveled to Peru, Mexico and a few other countries for equine adventures, but was not committed to looking for her next Eventing horse, or restarting her Eventing career.

Three years ago, through happenstance, she took a lesson with a famous Dressage instructor who had her ride a Dressage high level Spanish school master. Up until then she had only competed and trained in Eventing Dressage. This one lesson on this one horse had her hooked and was the instantaneous turningpoint for her from Eventing, to the discipline of Dressage and a love affair with Iberian horses. Megan’s ultimate goal became to compete in Dressage with Iberian horses with the aspiration of competing at the international Grand Prix level.

Megan thought: go big or go home…. So she decided to go big and moved full-time to the mother land of the dancing horses, Andalusia Spain! Right now she is in the process of looking for a high-level dressage horse to help her reach her goals. Everyday is a new adventure as she immerses herself in the Spanish equine community, meeting and training with some of the top dressage riders in the world, and trying out incredible horses while on the hunt to find her Spanish four legged team mate.

Megan’s style is a combination of getting down and dirty from her eventing years in America, with her new life as a classy Spanish dressage rider.

Like her style? Here’s all you need to know to get her look:

She absolutely loves breeches that have a good full seat grip.  Now that she has to be glued to the saddle all the time for dressage, it’s always nice to have a little extra help and these Pikeur Lucinda full seat grippy breeches are a perfect pair for Megan. She likes a pair of not so traditional boots to school in on a daily bases like these Donadeo custom polo style boots.

Megan never leaves her home (or the stables) with out her Rebecca Minkoff Medium Julian backpack and bag charm, which is great for traveling too. Having to beat the Spanish sun on a regular bases, she always wears her  MCM VISETOS sunglasses and  told us she can’t ride without her SSG digital gloves and has them in every color.

She’s surrendered to preppy polo shirts for dressage and actually has them in all colors, thats why for this look we went for the peach flower polo by Cooperativa Piscatory Posillipo with a matching baseball cap.
Its really hot in Spain so Megan likes to get out of her breeches as soon as she gets off the horse. She likes to slip on her Rag & Bone cut off shorts and slip on her Jimmy Choo sneakers (part of her designer shoe addiction)

Megan loves her One k helmet which goes perfectly with one of her favourite statement pieces: the Rebecca Ray bridle stitched belt.

Last but not least: Megan’s look would not be complete without the Tiffany horseshoe pendant necklace given to her by a friend: “I wear it almost all the time for good luck” Megan told us.